The title of my post “Authentic Indian Dishes To Cook At Home” may seem a little off piste, but please bear with me, it will all become clear…

I’ve been studying the progress of a Social Media savvy Chef on YouTube for some time now by the name of Chef John. This guy is hugely successful at what he does, he has really worked out how to to get his messages out there, and how to engage with his audience. Every week Chef John videos a new recipe which he uploads onto YouTube, it is accompanied with a post on his blog with supporting information, and he outputs a flurry of Twitter activity about what he’s just done. However, there’s a new kid on the block now, a new rival has recently appeared on the scene called Bhajiman and I shall be watching him cook his authentic indian dishes with interest.

Make It Easy – With Passion 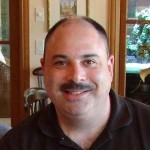 When people visit any of Chef John’s sites he makes it really easy for everyone to connect, spread his message, and become an involved member of his fast growing community. You may think that’s the main of the reason for his success but you ‘d be wrong –  It’s because he’s found a niche, he is producing the content that his followers are hungry for (no pun intended!) and most importantly, he’s passionate about what he does, he has lots of fun doing it, and it shows.

When you look at Chef John’s work, he makes it looks so easy, and I’ve been watching him evolve and develop over over last few years. He has a formula – and it’s a magic one – Give people exactly what they are looking for, make is easy for them to spread his message through social networking, and have fun while you’re doing it.

Although in comparison Bhajiman has only just started his social media journey he’s selling products that make cooking Indian dishes in the home easier for people. He comes across as having a very shy and gentle persona, but whether that’s a deliberate part of his online persona or not time will tell.

Chef John is authentic in everything he does within his niche. He produces a 3-4 minute video recipe that anyone can watch to learn how to cook great looking, and awesome tasting food. He makes it fun, he makes it sound easy, and it’s genuine. He doesn’t have any hidden agenda, he’s not selling anything.  He’s passionate about what he does, and simply enjoys helping everyone in his own inimitable and friendly way. His cookery videos are well thought out, they follow a simple pattern – You watch one, and all the other videos work in the the same way. Because he’s authentic you trust him. 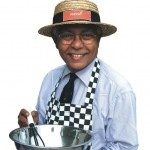 Bhajimans videos are about using the products he’s selling. His products are specifically designed  make Indian cookery easy for the general public, and his market is very niche. I’m sure we’ll find in time that as he learns how to use the tools that will enable him to engage with his audience we’ll see him move from this traditional sales approach to a more intimate one with his audience. He does have a Twitter account @bhajiman, and a great looking website at www.recipeinabox.bhajiman.co.uk but sadly there isn’t even a Twitter or YouTube button to be seen anywhere on his homepage – and he doesn’t even have his own YouTube channel yet.

There’s only one Indian dish I could find on Chef John’s site, and that was for Tandoori Chicken – not actually authentic Indian cuisine fit for a Royal Indian buffet, it’s an American version! He lists many different foods from all over the world, but there are no authentic Indian dishes. So why hasn’t Chef John produced any videos for recipes of authentic Indian Dishes? Because his visitors aren’t talking about them, they’re not asking him for Indian dishes, so he isn’t making videos of them.

Conversely Bhajiman cooks only Indian dishes on this site, but only dishes that use his products. Bhajiman doesn’t yet have a proper Social Media platform in place yet where he can engage with his fans or give them a voice. As a result he’s almost deaf to their words, he cant ‘t listen to what his audience are saying, he can’t find out what they’re looking for, or what he needs to do to meet their needs and satisfy their hunger. I hope that Bhajiman starts opening up  his social media channels soon as I want to see him sharing more authentic Indian recipes that we can cook ourselves with our own ingredients. 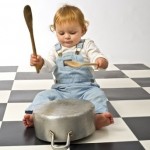 Finally, Chef John makes it easy for everyone to cook what he’s cooking in their own homes. He’s not trying to introduce specialised cookware, or using overcomplicated cookery processes, or trying to baffle us with “Cheffery Gobble-De-Gook” He’s making it simple for us. He’s ripped away all of the barriers to make sure that anyone can cook his recipes, just like he cooks them, but in their own homes. He uses simple ingredients that most people will already have in their homes, and uses a basic selection of cooking utensils that everyone should have in their cupboards at home as well.

Bhajimans products are designed to make cooking Indian food easy for us, but I fear that if he doesn’t start engaging with his audience soon he’ll just become one of the million other shops that are lost in the crowd on the internet.

We could all learn a lot from Chef John, I admire what he’s doing, the way he’s doing it, and the fun he’s having. It will be interesting to see if Bhajiman adopts Chef John’s tactics and becomes more passionate about what he’s doing and puts the social media tools in place that enable him to engage with his audience.

Are you Authentic? Are you cooking Indian Dishes? Are you helping people to Cook At Home? Are you Passionate about what you do and and Having Fun doing it? No? Then if you want to be as happy and successful as Chef John, then maybe it’s time that you re-examined your own Social Media strategy! 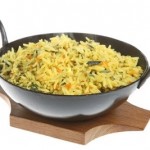 So as not to disappoint any readers who may have stumbled across this article expecting an authentic Indian cookery recipes that they could cook at home, here’s how to cook my simple recipe for Pilau Rice. It’s one of my authentic vegetarian Indian recipes and would be a perfect accompaniment to one of Bhajiman’s Indian food recipes, or to Chef John’s Tandoori Chicken, so maybe we could persuade them both to create a video of this amazingly authentic Indian dish for us too!

What are your observations of successful social media activities, is there something that really caught your eye on someone’s social media site lately? If so, please tell me about it in the comments below – Thanks.